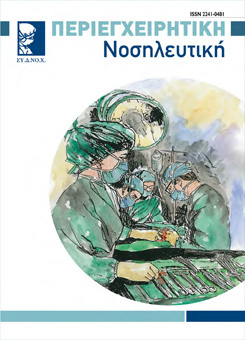 Traumatic brain injury is a major cause of serious harm­­ and death in children under the age of 15. The injury affects not only the patient, but also impacts heavily on close relatives. Caring for victims with traumatic brain injury is perhaps the most difficult of many professional challenges for nursing staff, requiring both technical and skills and sensitivity to the needs of the relatives.

QUALITY IN HEALTH SERVICES AND EVIDENCE-BASED NURSING: A NEW PERSPECTIVE ON THE SCIENCE OF NURSING IN GREECE

Introduction: General rules govern the health services market, as it happens with every market. Constitutional rules of the markets are the quality assurance via the continuous improvement of the quality of services in accordance with the rational allocation of resources, and the role of evidence based practice in healthcare is of outmost importance, influencing a lot the quality of care

Introduction: Crohn's disease belongs to a group of conditions known as idiopathic inflammatory bowel disease (IBD). The purpose of this review was to list information about Crohn's disease that occurs in pediatric patients. Methodology: The study material has recently been articles on the topic were found mainly in the electronic database Medline and the Association of Greek Academic

ACTIONS OF PUBLIC HEALTH AND THE ROLE OF THE ORAL HYGIENE

Introduction: Over the centuries the medical and broader sector of Health developed, made important inventions and discoveries, but never stopped the Health sector is timely. Every time there was a possible treatment of any disease, another disease appeared to be afflicted mankind. This requirement, therefore, of our time mainly focused on early diagnosis, the immediate intervention and prevention.

BULLYING AND SUICIDALITY IN CHILDHOOD AND ADOLESCENCE

Introduction: The episodes of violence and aggression in schools is a common and growing in frequency phenomenon. Research has shown that the engagement with school bullying is a major risk factor as far as suicidal ideation and suicide attempts are concerned. The aim was to review literature about school bullying and cyberbullying as well as the suicidality in children and adolescents.

Introduction View is fundamentally important to the healing process, well-being and consequently the cost of care. Unobstructed view has been connected to more frequent satisfaction and comfort, as well as higher threshold to discomfort. Τ he aim of the study was to investigate the role of sight in the evaluation of the architectural environment of patient room settings. Method View access

EVALUATION OF CRITICAL CARE NURSES REGARDING KNOWLEDGE IN PULSE OXYMETRY

Introduction: Pulse oximetry is a non invasive method which determines the saturation of hemoglobin in oxygen and is early detecting  hypoxic episodes. The aim of the present study was to evaluate nurses' knowledge working in Intensive Care Unit (ICU)  regarding  pulse oximetry.  Method and material: The sample of the study consisted of 206 ICU nurses  in 5 general

Introduction:  The natural disaster is the probability of a potentially catastrophic event that happened within a period of time and in a particular geographic area. Purpose: The purpose of this study is the literature investigating the effect of natural disasters on health.Material and Methods: It was conducted a review in researches in Greek and international databases (Medline and